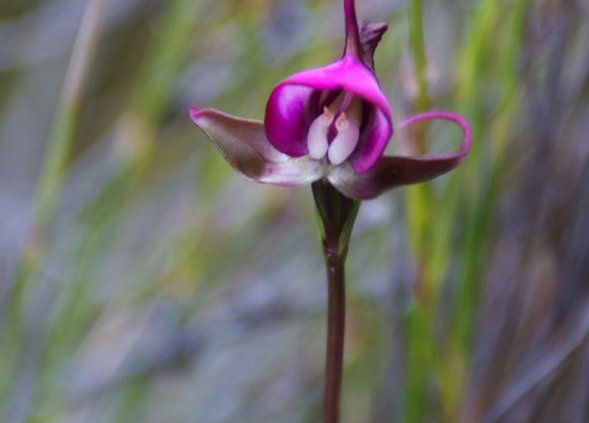 I have never taken a walk at Rhebokskloof without finding something new or something puzzling. Just last week I was walking on the large flat granite outcrops above the farm, when my eye caught something extraordinary. A drab, night flying moth, was systematically visiting the flowers of a Satyrium orchid, a rather common species in fynbos. Just by the way, in South Africa we have more than four hundred species of orchid!

Worldwide there are more than 28,000 species, thus forming the second largest plant group, after the more than 32,000 species of Asteraceae. A relatively small island like Borneo has more than 2000 species! One should also remember that, over and above their decorative importance, orchids also provide us with vanilla, that fragrant ingredient so widely used in cooking and confections.

But, when it comes to pollination, orchids are surely the masters of the plant kingdom. As early as the early 1850’s Charles Darwin was fascinated by the extreme adaptations of orchid flowers and also published a book, Fertilisation of Orchids, in 1853. When visiting Madagascar, during his round the world voyage on the Beagle, he found an orchid with a most unusual and long spur and predicted, accurately that it would be fertilized by a spesific long-tongued moth. More than a hundred years later he was proved to be right when the moth was discovered.

There are three ways in which orchids attract pollinaters. The first is colour, and when one looks at orchids in general, this becomes patently obvious. Some tropical orchids have truly bizarrely bright colours and this helps them to “advertise” their prescence in the dim light of rain forests. Then there is smell: of the most intoxicating smells in nature are to be found on these lovely plants. But the most bizarre adaptation in orchids is that of imitating, sometimes uncannnily, the female of the pollinating insect. Males, drawn closer by smell and colour, suddenly sees a beautiful female, and in a fit of passion, mates with the flower. In the throws of this coupling, he fertilizes the flower, subtly rewarded by sweet nectar.

Now it is time for the seeds to develop in capsules. Many orchids produce millions of seeds per capsule, which is then spread with the wind. They are so light because they have no endosperm (the food store needed to help the seddling develop), and rely on a highly spesific fungus to help them develop. Like most reproductive strategies of primitive plants, and insects for instance, they are successful if only one seed makes it to adulthood. They flood the market, hoping for a single success.

Although South Africa is blessed with many species of orchid, most of them are small, some microscopically so. Out most spectacular orchid is the internationally famous Disa uniflora, also known as the Pride of Table Mountain. Unfortunately this beauty does not grow at Rhebokskloof since it needs mossy banks of permanent mountain streams and waterfalls. But, Rhebokskloof has a smaller, similar looking orchid. Disperis capensis, or Moederkappie ( motherr’s bonnet) grows on the slopes above the vineyards. It is tiny, about the size of a thumb nail, but it is one of my favourites, simply for it’s sheer elegance.

When next you see spectacular orchids for sale at the florist, you can be assured that they are exotics and hybrids more than likely. But we have our own beauties, hidden until discovered. And this is more reason why you shuld take a fynbos walk, when next visiting Rhebokskloof.

Want to join the discussion?
Feel free to contribute!

Why beauty?
Scroll to top